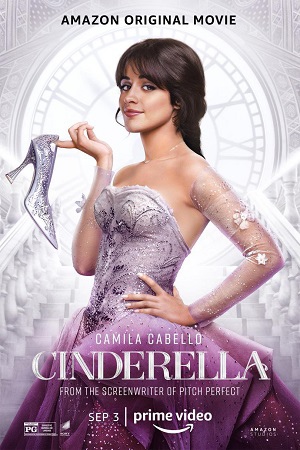 Cinderella is a romantic musical comedy film that is very different from its previous versions. Based on the fairy tale by Charles Perrault, it stars the singer Camila Cabello, we see a Cinderella who takes on fighting for her dreams in a much more modern way than the traditional tale: as in the original story, Cinderella lives with her stepmother and stepsisters abusive and overprotective between them, we know that the stepmother murdered Cinderella’s father to inherit all his wealth. And after that death, they decide to keep the princess in a cold and damp basement.

Cinderella knows that she has many talents and one of them is designing very elegant dresses. In the company of her friends, her mice, she dreams that she can be a great business woman and be a successful woman. Meanwhile in the castle, the king talks to the prince so that they organize a great party in the kingdom in order to meet a girl who can be the prince’s girlfriend. As in the traditional tale, all the single women in the kingdom are invited to the party, but it seems that Cinderella’s stepmother and stepsisters have other plans for her.

A peculiar fairy godmother makes her appearance to save Cinderella’s night, who before the prince makes a decision about a royal marriage, she must first decide and fight for what she wants for her future even at the cost of her happiness in love. In this story we will learn about the backstory that the stepmother has and we will have surprises when we discover that the director of the film seems to be determined to erase all the stereotypes of the original film, and also its mystery. Not all villains are that villains and not all good guys are that good. You can’t miss this amazing modern Cinderella musical adventure.