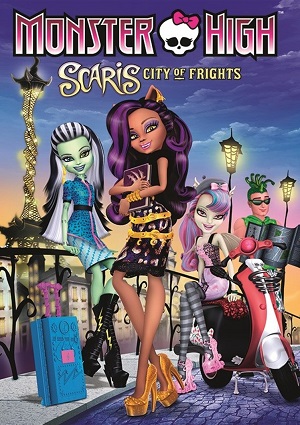 The plot unfolds when Clawdeen, who is a very talented designer, receives a scholarship to study a course with Madame Ghostier in Scaris, it is noteworthy that this girl had prestige internally on the catwalks of Monster High, but had never gone out to other scenarios and such an opportunity presents itself. Participating in such a contest was something of chance that she did not expect, she sets out on her journey towards Scaris accompanied by Frankie, Draculaura, Chawdeen, Langoona, Cleo, Rochelle, Abbey, Ghoulia and Toralei, who travels as a stowaway in Abbey’s suitcase. Everyone had the opportunity to live their adventures and share their experiences.

In this episode, the girls do not take long to discover that something was wrong, here their journeys begin, Frankie accompanies Rochelle to look for her beloved Garrott Du Roque, who was locked up by Madame Ghostier because, in her opinion, it no longer served her because his creativity and inspiration to design had been exhausted. For her part, Ghoulia is dedicated to performing shows to raise funds and solve her problem with her means of transportation, since she had to recover his motorcycle, which was practically destroyed.

Meanwhile, Toralei, Draculaura, Cleo, Abbey and Lagoona, are dedicated to visit the landscapes of Scaris, on the other hand, Clawd, Deuce and Heath begin to miss their girlfriends and decide to visit them.On this tour, the girls meet two new girls, Skelita Calaveras and Jinafire Long, who were also in Scaris as course participants, exchanged information, once they found out everything, put aside their differences as competitors and decided to join efforts to unmask the entire network of things that were behind Madam Ghostier’s real intentions, in this way they successfully, through their own style, beat the designer in their own game. Are you ready for this new adventure? Welcome!