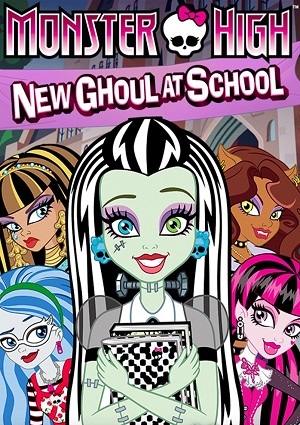 The saga of this series of films that we all love begins! In this film, Frankie’s first days at school are narrated, the problems faced by every new girl in school and how she befriends Draculaura, Clawdeen, Lagoona, Ghoulia and later Cleo and Deuce. In the movie Monster High: New Ghoul at School, Frankie is a new girl, who comes to school with a lot of fear and wanting to integrate quickly, something that is not easy. Something that surely happened to all of us on the first day of school! The new girl has to enter a group that is already closed and where relationships are already established.

There are groups of friends who do not accept new members. Frankie knows it, and that’s why he tries to make friends quickly, showing his empathetic and pleasant side, although at first she messes up, something that happens because of her insistence and the desire she has to integrate with the guys of her new institute. Luckily for her, things change little by little. Before long, the new girl befriends Draculaura, Clawdeen, Ghoulia, Lagoona, and even Cleo in the end, she knows as not everyone makes friends with the same speed and some have a harder time trusting people. It is a great lesson that the movie leaves us.

Things will not be so easy, but towards the end of the film we see that the new girl has made a very strong friendship with all her classmates, so they soon stop considering her as “the new one” and begin to be part of the school. From this moment on, the adventures of the Monster High girls begin and with them a good number of movies that you can’t miss. These adventures are entertaining and sometimes crazy, but everything ends up strengthening their friendship bond.