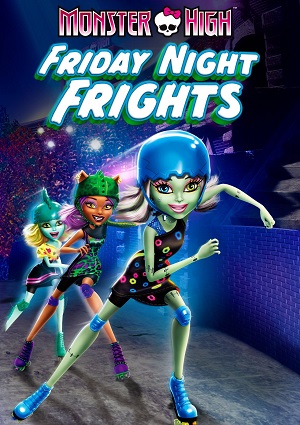 This story of Monster High revolves around a school games competition that students carry out between several monster schools, their names Scream or Extreme Skating, that is held in a kind of catacomb-like labyrinth, where the resulting team winner will get the shield of the opposing team. According to the customs or traditions of this competition, they do not allow the participation of women due to their physical condition, since they are considered weaker. In the previous meeting, Deuce, Clawd and Gil, participated and had to face the gargoyles of Granite City, but because they are weaker, they are hurt in front of the rival teams with whom they lost the competition and with it the shield of the school. That was a sad defeat!

As a result of this experience, the girls Draculaura, Frankie, Lagoona, Abbey and Clawdeen, decide to compete to recover the shield and honor of the Monster High school. In this same order, they ask Opertta to join the team, which she does not accept due to her rebellious character, but when she observes the performance of the team that was constantly failing, she decides to unite to reach the end with Clawd as coach.

Rochell Goile withdraws from the competition due to discrimination against girls, while Rebeca resurfaces thanks to Ghaulia and Frankie, but Toralei wants to gain advantages for being the girlfriend of the coach of the opposite team, and it is through a plan drawn up by Operetta, which Clawd and the Moster High team make possible for the team to triumph, recovering their shield and honor. Frankie gives a speech where he encourages them to forget the old differences so that sport is for everyone, and this is how they start a new mixed game, where students from different schools are integrated.