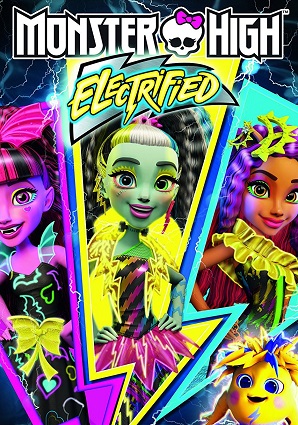 This movie begins when Clawdeen dreams of opening a beauty salon and she wants it to be the most electrifying of all time, in which she aspires to pay attention to monsters and humans, but the bad news about this story appears to ruin everything. This is about Moanica, who upon learning that humans fear darkness, begins with her macabre plan. On the other hand, the girls listen to Clawdeen’s dream, and then Frankie comes up with a magnificent and brilliant idea.She wants everyone to go to the abandoned power plant on the outskirts of the city, the place where she lived.

These little monsters needed a spark of inspiration to reclaim the place and Frankie owned her, the girls must get everyone to be there on a high voltage opening night. Meanwhile, Moanica unfolds her plan and sends her Zombies to wreak havoc at school and in the city, scaring the humans, who flee in terror to their homes. The bad news continues to grow as they realize there is no light. The electrical power had been cut because Moanica kidnapped Frankie to give him a high-voltage shock. The electrical connections had been affected and so the city lights had been completely turned off.

The girls try to strip Frankie of excess electrical energy from her body and ask Snap to help them. Once they are successful, they immediately activate the plan to completely finish Moanica’s plans. A large crowd of Snaps arrive in support and go with the girls to town to face Moanica and her zombies. This is almost incredible!!! In this way they triumphed and managed to stabilize the city, Moanica was punished with services, cleaning the beauty salon and the girls managed to gain the trust of the Normis again restoring peace and joy between them.