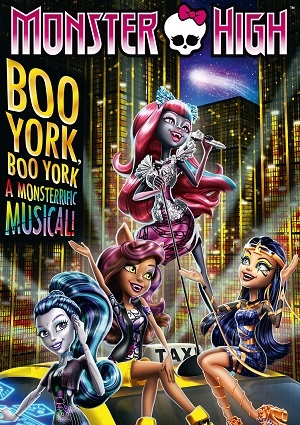 Welcome to a new monster girl adventure, this time we start a new story when Cleo of the Nile receives an invitation to attend a gala party in Buu York, to celebrate the return of a Magical Comet, but as expected, Cleo will not go alone, because she will take her incredible friends with her. At first they dedicated themselves to knowing the city, shopping in search of the best outfits and showing all their glamor, the city was bustling waiting for the big moment, but not everything is rosy, things start to get complicated when the sister Cleo’s Nefera has a macabre plan in mind.

Finding out that the comet has mysterious magical powers, Nefera wants to use them maliciously against Catty Noir, steal her voice and, even worse, manipulate her sister Cleo to marry Prince Ced Tolemin, because in this way it would become very rich and powerful. In this adventure they will meet new friends. Luna Monthews, daughter of Mothman, drawn to the bright lights of old Bloodway, Elle Eedee, who is a music lover and daughter of a robot, Seth Ptholemmy, Mouscedes King, daughter of the Rat King of the Upper Beast Side, is a rat, but with a heart of gold and Astranova, a dreamy alien who will pay a visit from the skies, who helps everyone find their music.

All together, they join forces to end Nefera’s plans, while Goula works intensely to prevent the comet from colliding with the earth, for which she discovers that with musical notes you can save the world, in all this plot, the monsters They will try at all costs to carry out the engagement ceremony of Cleo and Ced, and they succeed, deciphering the mystery of the comet. Are you going to stop watching this movie? I do not recommend it! Enjoy now of Boo York, Boo York.