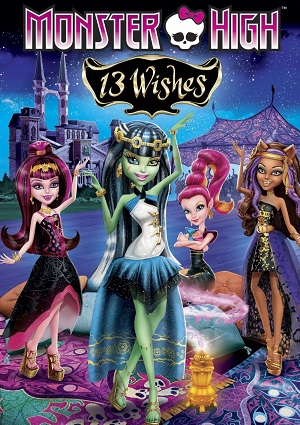 With the start of a new school year at Monster High, Howleen rebellious as always!! is tired of being in the shadows of her older sister, we all know how she has been in her behavior. The story begins as a punishment for services Howleen receives for her behavior, for her rebellion at school. The girl, reviewing the place, finds an ancient magic lamp that was hidden in a deep place in the attic of the Monster High school, picks it up, manipulates it with great curiosity and in this process the unexpected occurs.

But, we never imagined that a genius appears named Gigi Grant appears to her, who is released granting 13 wishes to Howleen who, without thinking twice, began to make her requests, because without a doubt she also had requests to get out of the shadow of her sister. At first everything was going very well, her wishes were being granted without any difficulty, but after a while, Howleen realized that something bad was happening, because every time she made a request to the genie, he was accompanied by one side Dark wreaking havoc on the bodies of Monster High School students.

Everything seemed very strange to her, it was not normal that every time she made a request to the genius, she found out that there were negative events in the students, in addition to this, the girl was under an evil spell of temptation, the young woman felt guilty for What was happening. The intention of the genius was oriented to dominate the world through Whisp, however, despite Whisp’s tricks, they managed to avoid this inconvenience, which even achieves reconciliation between the two sisters, as well as wishing that Gigi stayed to study in Monster High while Whisp is the new genius of the wonderful lamp.Are you ready for this new adventure? You can’t miss this movie.