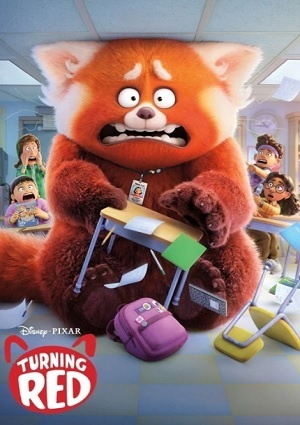 Meilin “Mei” Lee is the perfect 13-year-old any parent could wish for. A studious, helping, and abiding young girl that Mei Mei is, she constantly works towards winning her mother’s approval. Still, she has some secrets which her mother will not approve of such as part of being an obsessive group of friends who go gaga over the boy band 4*Town.

Apart from her newfound likeness towards boys, Mei Mei does as her mother wishes which include helping her with the family temple duties. After a bad day, one night Mei Mei goes through a nightmare. When she wakes up in the morning, she has turned into a giant red panda. Trying to hide from her mother, she leads her to believe that she has started menstruating. Soon, Mei Mei realizes that the panda comes out when she’s going through an overflow of emotions.

She heads to the school but is secretly followed by her concerned mother. An embarrassing situation follows releasing the red panda. After a quick chase, back at home, the secret behind the panda is revealed to her by her parents. All the daughters of the family were gifted by the family deity with the power to turn into a red panda when they reached the right age. Mei Mei is told about the ritual she will have to go through that will get rid of the panda.