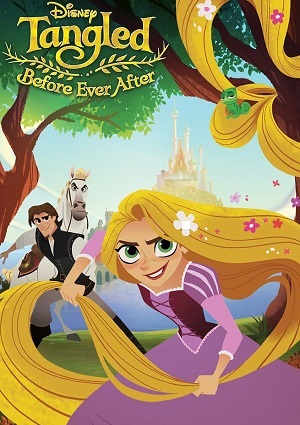 It seems to be the beginning of Rapunzel’s happiness, once and for all, however this time it will not be like that, once the first part of the story has happened, that ending is not exactly what she dreamed of. Eugene quickly adjusts to her new life in royalty, but for Rapunzel it is increasingly difficult to adjust to the life of a princess, each day is a more difficult process. Her uncontainable spirit and natural curiosity lead her to realize that she has much to learn about the world before assuming her role as Crown Princess. Overwhelmed by her new responsibilities, Rapunzel runs away with her maid and friend Cassandra in search of a night of freedom in which Rapunzel recovers her blonde hair and has to learn to love it.

In this context, the endearing characters of the film accompany Rapunzel in her adventures, including her life partner, Eugene, her faithful chameleon pet, Pascal, and her diligent horse, Maximus. In addition, the series introduces Cassandra, who as we have already seen is a new character who becomes a great friend and confidant of Rapunzel in this somewhat complicated stage of her life where the princess will face new personal battles.

It is a very funny story produced by Disney Television Animation, Tangled: Before Ever After was a success in its audience and now we have it for you, you can’t miss this new adventure of the princess with the longest hair in Disney. Will she be able to accept all that her new life as a princess entails? Will you be able to be happy once and forever? The series follows Rapunzel on her adventures as she gets acquainted with her parents, her kingdom of Corona, and her people. Stay with us!! Rapunzel Rapunzel is waiting for you!