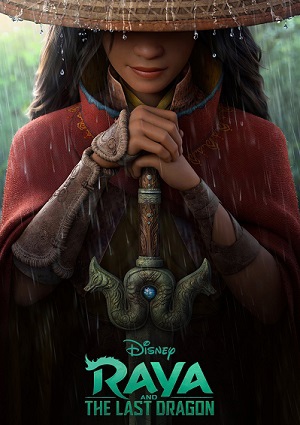 After being ravaged by the Druun spirits, Kumandra was rescued by her dragons to try to regain some of the prosperity they used to have; however in their fight these dragons ended up being petrified and defeated by the dark forces. Kumandra has since turned into chaos, and is divided into different tribes whose struggle for power has destabilized all its inhabitants. After 500 years of these events of destruction, the chief of one of the tribes realizes that it is time to end that division and decides to train his daughter, named Raya to fight to unify the tribes, and that with his strength managed to grant all those people a little hope after so much confusion and darkness.

In order to achieve this, Raya’s mission is to find the last surviving dragon from the fight against the Druun, because only with her help can they combat the evil of those spirits and help all who have been affected; but her journey will not be easy or short. And she must learn many lessons along the way. A lot of situations occur in this process of finding the last dragon, the road is not easy at all.

After a long pilgrimage and with great difficulty, Raya finds Sisu a dragon who, due to her clueless nature, doubts that she can be the help that the tribes seek. But since hope is the last thing to die, Raya trusts in the fight and in Sisu’s power as the last dragon. She will also learn that unity is strength and in that struggle, Raya knows that with trust, unity and belief in ideals she will make the earth as prosperous as she used to be. Do not miss this movie full of strength and adventure that we are sure you will love.