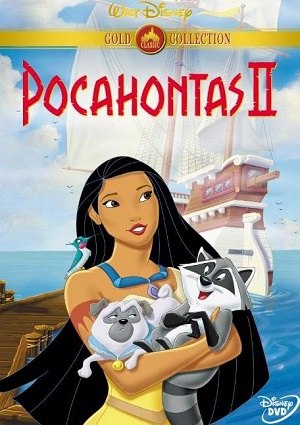 All characters who had been in the first movie are the same with the original voices, except Captain John Smith, who in this film has another voice that you too will enjoy. As an ambassador of peace, Pocahontas goes to England to meet King James I. In this way she is accompanied by her friends: Flit the hummingbird, Percy, the old dog of Ratcliff and Meeko the raccoon with all of them is heading into an exciting adventure on the boat.

Pocahontas was excited to learn the news of the new world and begins to learn new things; she participates in events of high society and the English nobility. Pocahontas has a mission to prove that the king as is her land: prove that the Indians are civilized, but the wicked governor John Ratcliffe tells the opposite of them. In this film also Pocahontas must choose between John Smith (his first love) and John Rolfe. What will happen? Discover it!