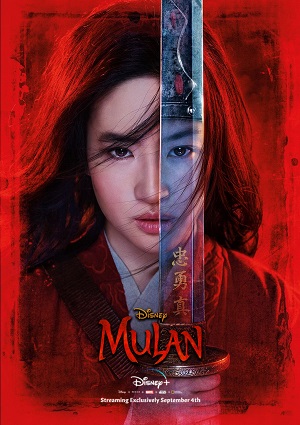 The live action of Mulan is an adaptation of the Disney children’s film that presents us with an action story with scenes very different from what we saw in the animated film. The history of the Chinese heroine is presented with combat, martial arts and action scenes that will tell an argument very similar to what was seen in 1998. The warrior army of the Huns, led by Shan Yu invades China by crossing the great wall, at their course they cause terror and destruction, giving a warning to the Chinese emperor. The emperor has no choice but to order the recruitment of one male from each family to join the army.

It is then that we meet Mulan and her family, she is a girl who is being educated to honor her family by becoming a good wife and a good mother, but apparently destiny has a surprise in store for her and a very different path. With the notice of conscription to the army, the only man in her family is her father, a sick old man who would not take long to die in the war, something the girl is not willing to allow. She decides to take that place, posing as a male warrior, wearing her father’s armor.

When Mulan’s family finds out what the girl has done, they know that it is impossible to do or say anything about it, because if they find out that she is a woman, they will execute her instantly. This is how Mulan’s adventure begins. In the military camp, Mulan manages to deceive everyone by doing hard training and training herself as a great warrior. Mulan is ready for the battlefield and will prove it in one of the most terrible outrages against the Huns. Will their secret be discovered? Can your effort be recognized without the need to impersonate a man? Don’t miss out on this impressive story full of action and adventure.