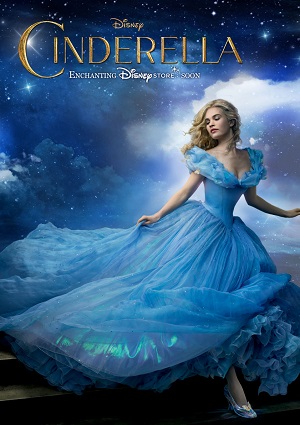 After the death of his wife, a rich merchant marries a second time to give his daughter Ella a new mother. Unfortunately, an accident leaves the orphan girl and in the hands of her evil stepmother who takes the opportunity turn the girl into her maid.The young woman’s life goes by very sad, however has the illusion of being able to attend the royal dance in which the prince summons to meet the person who will be his future wife. Thanks to the help of a fairy godmother, Ella gets a beautiful dress and crystal shoes to go to the party, where she can prove herself. However, things will not be so simple for Ella, who must face envy and evil.

Many stories of the French writer Charles Perrault are still reading to children, Cinderella is one of the best known. Disney knows this and that is why it reinvents a story that already led to the cinema in the 50s in the form of cartoons, getting 3 Oscar nominations. In this case, perform a reinterpretation with real characters and new special effects. The director Kenneth Branagh nominated several times to the Oscar as much as actor, director and screenwriter, puts himself behind the cameras where he contributes his particular vision to the script of Chris Weitz.

Young actress Lily James, known for her appearance in the British series Downtown Abbey, puts on Cinderella’s crystal shoes. For its part, the winner of two Oscar Cate Blanchett, plays the evil stepmother. Richard Madden and Helena Bonham Carter are some of the members of Cinderella’s cast that in this live action version allows you to once again enjoy this story that will always break the barriers of time. In this movie the message of female empowerment is very clear, so, you should not miss this classic brought to reality.