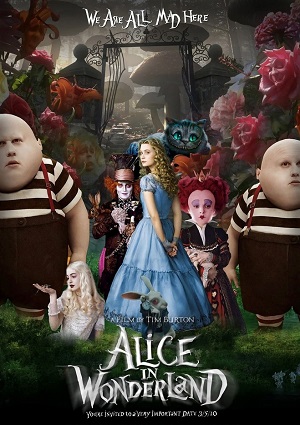 Alice, in this adventure, goes to a party, but when she discovers that her commitment to a rich heir is going to be announced, she flees after a white rabbit that she had seen running through the garden. The rabbit makes her fall into a burrow that takes her to a fascinating world where Alice was when she was a child, although she doesn’t remember anything. Together with a Mad Hatter, a mocking cat and a smarty caterpillar, the young woman will help overthrow the tyranny of the Red Queen in favor of her sister, the White Queen. Many more surprises contains this film that adds elements to the famous original story.

What happens when a literature classic is associated with Disney, the best 3D technology and the talent of one of the most imaginative directors of recent decades? Well, there is a visual spectacle as magical as Alice in Wonderland, one of Tim Burton’s masterpieces, which presents an amazing world where people, animals, landscapes, and objects seem to be taken from a story surreal and lively fairy. Do you want to live a world full of color, laughs, and adventures and remember your childhood? So Alice’s live action version is a movie you have to watch.

The story retains all the characters in the story, although the script has notable differences. The most obvious is to present Alice as a 19-year-old girl who returns to a kingdom she only remembers in dreams. In a movie by Tim Burton, the presence of Johnny Depp, who dresses as Mad Hatter, and Helena Bonham Carter, who becomes the Red Queen, could not be missing. Beside her, Anne Hathaway, as the “good sister” of the Queen, and Matt Lucas, in a role of twins. Alice in Wonderland won two Oscars: best artistic direction and best costumes.