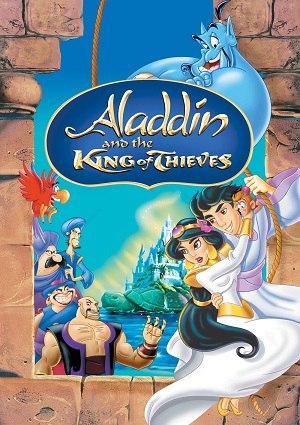 Is a animated film with stamp and quality of all Disney films. This movie is the sequel to “The Return of Jafar” so we assure lots of fun. The plot of the film is as follows: When Aladdin and Jasmine are about to marry, the event is interrupted by something unexpected. Everyone is very excited about the wedding, but unexpectedly reach the famous Forty Thieves.

Through the oracle, the young man discovers that his father is alive and his fiancee advises you to go in your search. Meanwhile, the forty thieves go in search of the hand of Midas, he turns to gold everything he touches. The band of thieves is led to Cassim, the father of Aladdin. Throughout the film, the genius transforms into various characters from Disney:

Tinkerbell, Pocahontas, White Rabbit Alice in Wonderland, Pumba, Mickey Mouse (driving a steamboat, referring to Steamboat Willie), and he becomes the Marx Brothers: Groucho, Harpo and Chico. Very funny!! Also, in a scene genius becomes the princess Jasmine in Cinderella; in another scene the genius puts to Snow White the Little Mermaid Dress. It’s so funny! Don’t forget you can watch this movie for free!