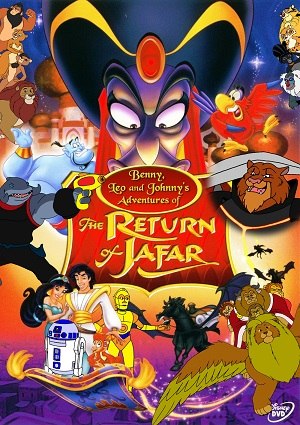 Is the sequel to the film Aladdin; this is also a Disney movie so we find all the magic of the previous films like “Aladdin and the King of Thieves”: a film that served as a prelude to the Aladdin TV series. Have you seen any? If you’re a fan of Aladdin you can’t miss this beautiful film.

The film focuses primarily on Jafar’s revenge against Aladdin and his friends. Jafar has always hated Aladdin because the guy truncated his plans. And now Jafar wants to become the new master of Agrabah. Aladdin and Jasmine live happily in the royal palace, surrounded by luxuries and the magic Genie. But, far away, something stirs in the desert sands: Iago, Jafar’s parrot toothy, has escaped from the lamp that kept prisoners.

After betraying its master, the parrot chooses to live a life where he is the boss. But a bandit finds the lamp where Jafar lives, the evil man gives one desire to bandit, and he helps Jafar to release him and fulfill his purposes: destroy Aladdin. Now it’s time to defeat Jafar and return to fight against his evil. Many characters joined in the fight, but only one will achieve victory. Who could it be?