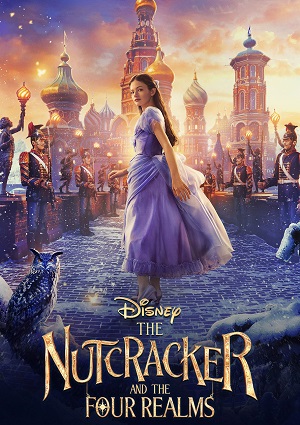 The Nutcracker and the Four Realms (2018)

The Nutcracker and the Four Kingdoms tells the story of Clara, a curious and highly inventive young woman who unknowingly sets out on a journey in search of the key that could restore harmony to an unstable world. Following a mysterious golden thread, Clara enters a parallel world with four kingdoms. Next I am going to tell you a little more about this story that will captivate your senses. Before Clara embarks on her adventure, the film takes place in the Palace, which is also where the Four Kingdoms meet. Inside the Palace is the throne room, from which all the kingdoms can be seen, but in order to access it, Clara must circumvent Cavalier and Harlequin, the palace guards, who prefer to flee from danger rather than face it.

The first fantastic kingdom is the Kingdom of Flowers, it is the home of beekeepers and farmers who produce flowers and wheat. Inspired by Dutch windmills and villages in southern England, the kingdom is full of flowers, fruits and vegetables, and is under Hawthorne’s supervision. The second is the Snow Kingdom, home to politicians, ice makers, and miners, this kingdom is like a giant ice hotel, with a transportation system made up primarily of reindeer sleds. The Kingdom of Sweets is a sweet tooth’s paradise, with nougat walls, ceilings made with chocolate tiles and stained-glass windows made with candies. The landscapes of this kingdom are inspired by the Sugar Fairy and her beautiful dress made of crystallized sugar.

While the other kingdoms are full of colorful characters and decoration that makes them unique and unrepeatable, there is something that their citizens do share: fear of the sinister Fourth Kingdom. It was formerly known as the Kingdom of Fun, but a fierce dispute led to the decline of the kingdom and the banishment of its leader. Mother Ginger is the evil tyrant Clara will have to face.