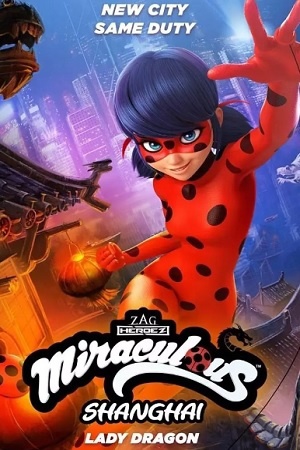 Miraculous World: Shanghai – The Legend of Ladydragon arrives in 2021 as a special episode that lasts 52 minutes. This episode takes Marinette and Adrien to Shanghai while they are on their school vacations, both finding themselves immersed in oriental culture and willing to discover their origins, which leads them to meet a new powerful and daring heroine named Ladydragon, a character that will be key in this great adventure full of action, discoveries and strong emotions for our French warriors who leave their city to face evil in another place new for both of them.

The story begins with Marinette making a trip to Shanghai to visit her Uncle Wang to celebrate his birthday while hoping to meet Adrien. However, when she arrives, her problems begin to arise, starting with the fact that her bag is stolen, carrying Tikki inside! This becomes a giant problem if she isn’t able to turn into Ladybug if she needs to. During the chaos of the situation, she meets Fei, a young woman with whom he creates a friendship that will lead them to discover a new magical jewel, which Hawk Moth has been looking for for a long time, if he can obtain it, he will become more powerful and will be more difficult for the heroes to be able to face it.

Among the interesting details of this trip is that Marinette meets her maternal grandparents, another important aspect is the fact that Marinette and Tikki get separated, something very unusual that has rarely happened. Something very important that is known thanks to this special is the fact that the Kwamis have a kind of “cousins”, that is, beings that are very similar to them and that are called Renlings. It’s a lot of new information to be gained for the French heroes, which takes everything to a new level.