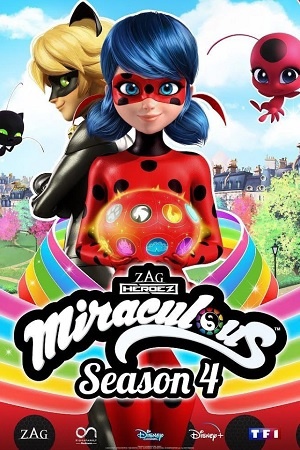 In 2021, a new part of Miraculous: Tales of Ladybug & Cat Noir hit the screens in season 4, which consists of 26 episodes full of action and fun. The adventures and challenges of the heroes who now have greater responsibilities are closely followed. This is the case for Marinette; she no longer only has to worry about being Ladybug and everything that this title entails to keep Paris in order avoiding all the damage from the villains, in this season it is appreciated that she has also assumed a new responsibility as guardian of the Miraculous. All this translates into a major secret that must be kept that way so that no one can discover the existence of the magical creatures, the kwamis, and someone wants to use them for their benefit.

On the other hand, for the young heroes, things at school are not easy either, this part of their life is also full of romance, secrets, and enemies. Most of the villains this season will be just his close friends, which makes his job even more difficult. Both heroes have become more powerful, which is clear in this season of Miraculous: Tales of Ladybug & Cat Noir, but also their greatest enemy has become stronger, Shadow Moth, who now has the Miraculous of Butterfly and Peacock.

There are many changes in this new season. For example, Chloé Bourgeois, in this part of the story, stops having a role as a heroine, now she has an alliance with Miracle Queen, all this because of the work of Hawk Moth. The allied superheroes that return to participate in this season are Ryuko, Pegasus, and Carapace. Similarly, other characters will be akumatized again, as is the case with Chloé, Kagami, and Luka, but all with new features in a new character.