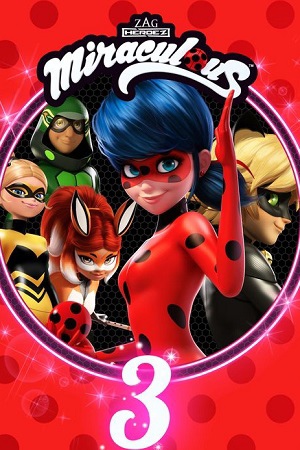 With 26 episodes, between 2019 and 2020, Miraculous: Tales of Ladybug and Cat Noir returns with its third season. In December 2018, the first appearance of this new season was held in the United States, reaching the full scope internationally in 2019-2020. It is easy to notice that there is continuity between the second and third seasons both were written together and the opening sequence is the same for both seasons. In the second part of this story, we can learn a little more about the character of Hawk Moth, while in the third season his intentions are discovered, in both seasons the villains seem to be stronger and that will show the strength of the superhero team and the need for help.

Regarding the teenage romance in this season, Marinette and Adrien become closer but form a great friendship. In this way, it is more difficult for her to be able to express everything she feels to her “friend”, so there are many emotions for her that she must continue to suppress. For the heroes, the situation is getting more and more complicated, as Hawk Moth seems to be more relentless day after day, generating powerful enemies for them, for this reason, new powers are granted to them in conjunction with new teammates that will be of great help in each of the most difficult combats. However, just as our heroes have new allies, a great villain appears, Mayura, who can create new akumatized villains.

What this new season of Miraculous: Tales of Ladybug & Cat Noir offers is more action, more powers, more villains, and more allies, all twice as much! New characters include Tomoe Tsurugi, Kagamis’s mother, Marianne Lenoir, Wang Fu’s wife, Felix, Adrien’s cousin, and his mother, his aunt Amelie Graham. Given everything new, it will be discovered if Adrien and Marinette will be able to continue keeping the great secret and maintain the balance between their private life and their action as superheroes.