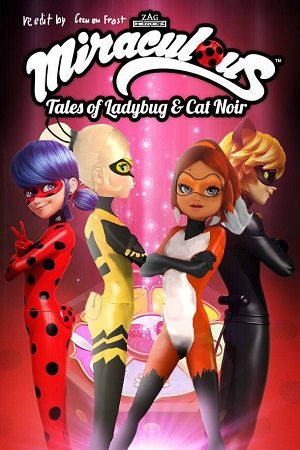 After a successful start, Miraculous: Tales of Ladybug & Can Noir Season 2 hits screens again at the end of 2017 to complete its international premiere in 2018, just like the first season with 26 episodes. New adventures of the pair of superheroes with some new characters create new stories in high school. Marinette continues to have her crush on Adrien, but she must be alert with Lila, a new student at the Françoise Dupont school, this character has a greater projection this season, she threatens to steal the heart of her beloved Adrien, as well as seems to want climb in popularity.

However, Marinette still has her most valuable ally, her best friend Alya, just as the two must join forces with the annoying Chloé. On the other hand, Adrien has his issues such as facing Kagami, a fencing opponent who is not easy to beat, so he will have to recognize her talent and try even harder to beat her.

In the action of the superheroes, the adventures do not let end for the brave Ladybug and Cat Noir, new villains with new characteristics appear to cause chaos and try to steal the objects that give them their powers. In this season, Ladybug can meet Master Fu, thus discovering that he is the guardian of the Miraculous and the healer of the Kwamis, she also discovers that he was the one who had the confidence to offer her earrings and make her meet Tikki, his Kwami. In this same way, the master reveals to her that there are other Miraculous with different powers, for which, it is possible the appearance of new heroes that occasionally, in complicated missions, join them and serve as support in their fights against evil, thus new characters are known such as Carapace highlighted by Nino and Queen Bee where Chloé stands out.