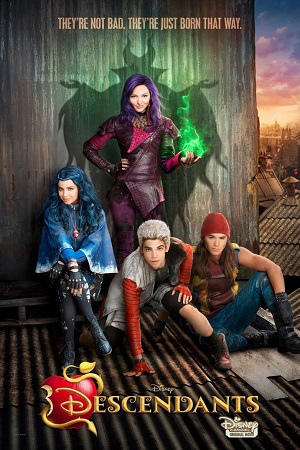 This is the start a saga of adventures of the descendants of the main Disney princes and princesses. Twenty years after Beauty and Beast married and became king and queen of the prosperous kingdom of Auradon, the couple have a son: Ben. But not only they have been parents: Carlos is the son of Cruella de Vil, Jay is the son of Jafar, Evie is the daughter of The Evil Queen and finally Mal is the daughter of Maleficent. These four boys have been ordered by Maleficent to steal the fairy godmother’s wand to break the magical barrier that exists between kingdoms and to conquer Auradon.

Meanwhile in high school the four boys meet Ben and his girlfriend Audrey, daughter of Princess Aurora. And that’s where they meet the Fairy Godmother, who is the director of the institute. They must steal her magic wand. The boys know that it will be Ben’s coronation soon and that is where the opportunity to steal the magic wand will be present. As this event reaches the lives of the boys, the children of the villains begin to plan their strategies to be able to fulfill the whim of Maleficent and in turn conquer Auradon.

When the day of the coronation arrives, Mal enchants Ben by falling in love with her, the boys know that it is the only chance they will have to steal the magic wand, but something incredible is about to happen the children of the Disney villains know that Auradon is a place where they can be very happy and live in peace, it will be a difficult decision to break that tranquility and break the barrier of the Isle of the Lost with Auradon. But… Maleficent will not stay so calm, she will break into the ceremony and freeze everyone except the four teenagers, will it be the end of this story? Discover for yourself the end of the story.