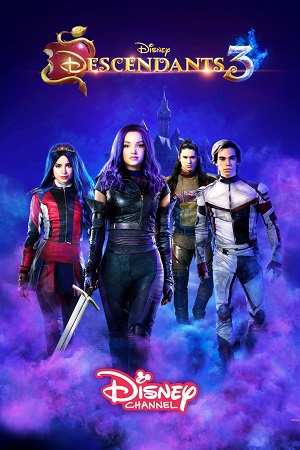 Mal, Evie, Jay and Carlos now happy with their lives in Auradon, return to the Isle of the Lost to celebrate Young Villains Day, where four descendants will be chosen to go to Auradon as it was with them. The chosen ones were Dizzy, Drizella’s daughter, Celia, daughter of Dr. Facilier and the twins of Mr. Smee. During the celebration, Ben, King of Auradon proposes to Mal, causing the jealousy of Audrey, Aurora’s daughter and Ben’s former girlfriend. The problems begin when during the night, Audrey, hurt and angry about Mal’s future, infiltrates the Museum of Cultural History and arrives at the Queen’s Crown, attracted and hypnotized by the Dragon’s Eye, steals the crown and takes the scepter, being corrupted and proclaiming herself “The Queen of Evil”

The next day, Ben, Mal and the Fairy Godmother are informed of the theft of the crown and the scepter, also concerned for the welfare of the Auradon, Mal proposes to seal the barrier permanently, knowing that tthey will never be able to return or they will be able to enter to see their parents again. This is one of the most difficult decisions to be made, but the kingdom is in danger as the only thing capable of defeating the Eye of the Dragon is Hades’ Ember. The solution must be taken.

Mal and her friends decide to look for him, But a surprise regarding Hades and Mal is about to be discovered, things will get more and more complicated and the kingdom in greater danger, meanwhile Ben is visited by Audrey, who tells him that she’ll break all spells of the kingdom if he makes her his queen, by realizing that the situation is complicated, the boys feel that this time all is lost. What will happen to this story? Will the end of the trilogy be tragic?