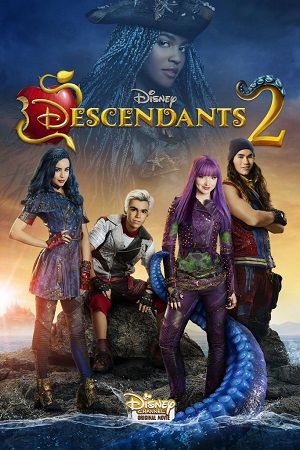 Six months after becoming a citizen of Auradon, Mal struggles with her new celebrity life as King Ben’s girlfriend, trying to look like the typical princess leaving behind her villainous style, she has become a celebrity, however, her effort to appear the perfect girl is causing havoc in her life. She is tired and doubtful of her life in Auradon, however, her friends Jay, Carlos and Evie are happy for what they have now. However Mal is making excessive use of magic used by Maleficent’s book of spells to solve matters of the kingdom, this will cause several problems, and she breaks the love spell with the king and leaves the kindom.

On the Isle of the Lost, Uma, daughter of Ursula, Mal’s former enemy, is jealous for Mal’s perfect life and resents that she is not chosen by Ben to go to Auradon. But what she doesn’t know is that Mal now dons her villain outfit again and returns with her mother to the Isle of the Lost, refusing to return to Auradon. Uma is determined that it is time to capture Ben and take him to his ship, and the deals to free him begin. A fight between Mal and Uma and the other boys.

The boys, wanting to protect Auradon and save Ben, decide to make use of technologies and spells that could give the boys the possibility to free Ben. Ben tells Mal that Uma is only resentful for not being chosen to go to Auradon and that she does not resent him for capturing her. Apparently things between Mal and Ben are not solved and Ben decides to take a chance with Uma then Mal reflects on the King’s feelings. Mal, enraged, transforms into a dragon, just like her mother and begins a battle with Uma, who of the two girls will win this battle?