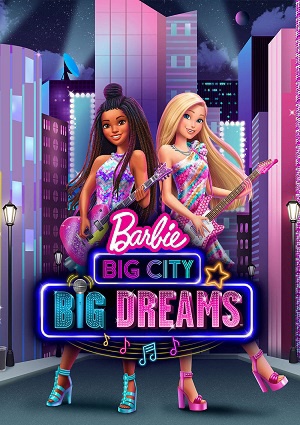 This new Barbie adventure begins when we see our friend traveling from Malibu to New York, all for a dream to realize: perfect her music and her stage talent to shine like a Broadway star! To achieve this, the girl enrolls in a performing arts summer program, Barbie must go on that trip alone, but she has all the support of her family and friends who encourage her to achieve her dream in the big city. Upon arriving at the academy, Barbie meets a very nice girl named Barbie Roberts! Amazed by this coincidence by having the same name, they decide to name each other Malibu and Brooklyn, where they both originate from.

Malibu and Brooklyn quickly strike up a friendship and realize that they both have a passion for music and dance. And that they will fight for the same dream in the big city. Both girls promise not to separate even if fame reaches one of them. Everything is going very well with her stay in New York and the classes in the performing arts summer program are fascinating. Until one day both will have to compete for the Solo Spotlight in Times Square. All students are excited about this challenge.

Lee is a strange girl who is present in the lives of the girls, she is a little jealous of the friendship between Malibu and Brooklyn so she approaches them, but the girls realize that she hides a great secret. A strange accident occurs with Brooklyn and everything seems to indicate that Malibu is involved in that sabotage, so our Barbie is expelled from the program. Both girls are very sad and can’t believe what is happening. Will it be the end of Barbie’s career? Will she achieve her dream of becoming a Broadway star? Will it be the end of the girls’ friendship?